A SORT OF AN APOLOGY KIND OF THING

My wife is OK with any sort of misbehaviour I might get up to as long as I apologise and admit I was wrong.

So yes, basically I’m screwed.
It takes a big man to say sorry and concede he might not have acted 100 per cent correctly 100 per cent of the time. It takes a far bigger man to admit he is lost and ask for directions, but that’s another matter.
In any event, as you all should know by now, I am nothing if not a big man.
In case you are not, for some reason, living in Beijing, the source of my angst is my appearance in a leading expat magazine here. Beijing Kids wanted to run a feature on stay-at-home dads, and so there I was.
It all looks pretty good really. There’s the nice smiley family portrait, the stuff about how proud of my children I am, the bit about we SAHDs bucking gender stereotypes. And let’s not forget my concession that I, as a stay-at-home dad, get pats on the back for achieving the mundane simply because of what sort of chromosomes I was born with, whereas stay-at-home mums do the same toil for not the same kudos.
All sounds reasonable and well thought out, no?
And then – CLANG! – what’s that grab quote at the top of our family portrait, the one in REALLY BIG BLOODY LETTERS?!
Well, I can’t go around all Beijing’s newsstands now covering it up with corrector fluid, so let’s just say it’s this:
“They probably think we’re like a fish out of water, but at the end of the day, it’s not rocket science.”
Ah.
Still there, stay-at-home mums?
When I see it written like that, I mean now that it’s put that way, I guess it leads me to think one thing: “Smug bastard, aren’t I?”
Now I’m not going to be one of these weasley types who tries to wriggle out of something by blaming a journalist. As a journalist myself I know all the old excuses.
But let’s just say I was misquoted. Badly. And taken out of context. In fact I was misquoted out of context. And the media blew the incident way out of all proportion in a classic case of the tall poppy syndrome. My lawyers are in quite a state about it, and have had to be sedated.
No I’m joking. The journalist, Sijia Chen, did a thoroughly professional job.
I could and should have chosen my words more carefully. I know this because my wife the doctor and childhood/parenting expert has been fielding complaints from patients, mostly stay-at-home mums, this week. They’re usually reasoned, thoughtful arguments such as “Perhaps he’s understating things somewhat”, or “It might be easier with daughters”, and that old, oft-heard question: “How could you be married to such an arsehole?”
And as my wife has relayed the mood from outside my parenting ivory tower about the backlash she’s been hearing, there’s one old saying which has kept me strong: “Better her than me”.
I feel like the Tiger Mother, only I'm hated for the opposite reasons. In one corner, with the rod up the bottom, the uptight uber-parent, forbidding playdates and scheduling her daughters down to the second. Slouched in the other corner, the laid-back Australian, whistling tunelessly and looking for something better to do while his kids run themselves.
But let me explain. And sorry.
What I should have said, and what I really feel, is that stay-at-home parenting is demanding, does require brainwork and there are of course loads of pitfalls you can fall into. But it is perhaps not high pressure rocket science. It's not like someone's barking “YOU'VE GOT THREE MINUTES TO DESIGN THAT ROCKET OR WE'RE ALL GONNA DIE!”
I felt far more pressure as a journalist near deadline time with an editor yelling at me. I’m sure most people felt similar pressure in their jobs before full time parenting. Usually in parenting you have time to see the pitfalls coming, like a slow-motion train wreck.
It can also be lonely and boring if you don’t break things up and do something for yourself occasionally. I always say one of the most important things is to indulge a hobby, or some other distraction, if time allows.
And of course we all make mistakes, even when we’re not racing the clock, and my family’s certainly not perfect. Why the other day I called Lani “Evie” for heaven’s sake! What’s more, Lani is six and she’s still not qualified for university.
My wife’s patients have also pointed out that it’s easy for me the say things like I said since I have as a wife, my wife. True, it’s like learning to paint with Picasso in the room, or having Paris Hilton as your mentor when you’re trying to be a complete pain in the arse.
But seriously, I know parenting isn’t easy. I’ve made loads of genuine mistakes, and will possibly make one more. Maybe three. But that’s it.
I guess, as an optimist, I mostly have a lot of faith in human nature and like to give people the benefit of the doubt that if confronted with a tricky parenting situation they can think it through, read a book, or consult an expert and come up a solution.
And when I think of parents and the parents I know, in my mind I’m thinking of parents with half a brain.
Not this guy – 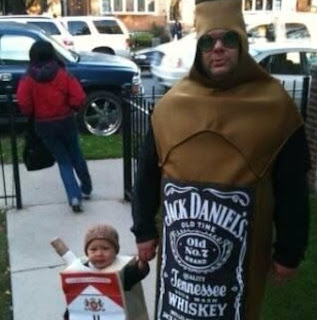 Or the parents of this guy – 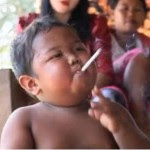 So, in conclusion, I am sorry to anyone who took umbrage at my offhand comment. I did not mean that if you make parenting mistakes you are a worthless clown.
I’m glad we’ve had this talk. I think I’ve learned a very important lesson.
Now, please read on. If this smug bastard can’t win you over with charm, hopefully there’s always wit.
Posted by Trevor Marshallsea at 4:46 PM