Still on football, outside a large electronics mart I met this man ... 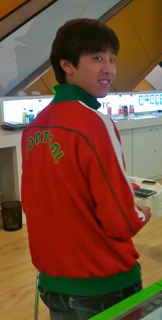 I noticed he was wearing a Portugal jacket, so I started talking to him about football.
"You like Portugal, then?" I said.
This country is actually a favourite topic of mine. Not just because Vasco da Gama is my hero, but because one piece of Chinese which has stuck in my head is that Portugal is said as Pu tao ya.
Rather than try to wrap their tongue around unfamiliar sounds, the Chinese use Mandarin syllables to approximate foreign language, in the same way English speakers call Italia Italy, for example.
It so happens the sounds in this example are the words for 'grape' (pu tao) and 'tooth' (ya). Thus, the Chinese name for Portugal is literally Grapetooth. A person from there is a Pu tao ya ren, or Grapetoothman.
I'm not sure which Chinese person settled on this originally, or what their attitude was towards Portugal.
Despite my passion for the topic, my man outside the electronics mart didn't seem to get it. So I tried some Chinese pronunciations of some famous Portuguese footballing names.
"Christiano Ronaldo? Luis Figo?"
He still didn't seem to get it, so I dropped it and went inside.
Later, I found him again, when I saw this ... 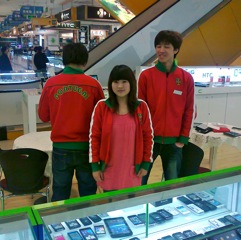 A whole electronics stall staffed by Chinese Portugal supporters? What was going on?
When I asked them what the story was, they asked if I wanted to buy an iPhone.
It seemed they had as little idea as I did why they had to go to their job every day decked out as Portugal fans. I was left to assume the boss had come across a box of the jackets and thought they looked quite smart.

Then I went off to another stall. 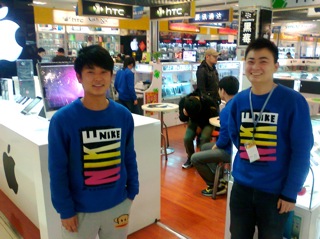 This time it was the Nike/Apple stall.
It seems that if you want to work in Chinese retail, wearing a uniform is important.
Any uniform will do.
Posted by Trevor Marshallsea at 10:07 PM