WHAT EVERY MOTHER NEEDS TO HAVE 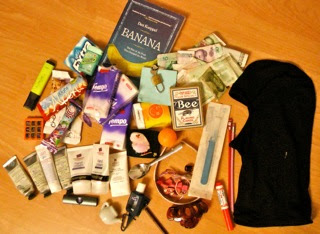 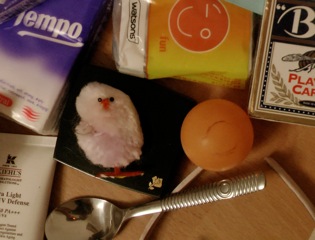 A teaspoon, a ping pong ball, a toy chicken, 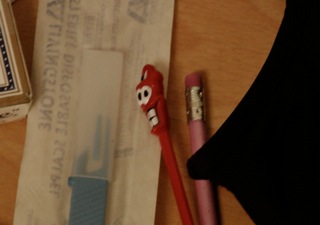 A red, smiling pick-up stick, and of course a sterile scalpel.


OK, that last item might be specific to doctors, or the clinically neurotic, or in the case of my beloved wife, both. But for heaven's sake. We dads, even the primary care-giving types, stay pretty minimalist when it comes to the belongings we lug around. The above haul was what was found when my wife set aside last weekend to clean out her handbag. It's true, you might never know when you'll need some hand cream. You would think it's fairly obvious when you leave the house, however, whether or not a balaclava might come in handy.

A study in Australia a few years ago found the average woman's handbag weighed a hefty 2.3 kilograms (five pounds). In light of this statistic, and the evidence above, I am thinking of nobly starting a public awareness campaign. It will be called the "For God's sake clean out your handbag!" campaign.

For one thing, it might save women all over the world back and shoulder pain. More importantly, it would save husbands an estimated 1000 man-hours per year spent waiting around while their wife rummages through her bag looking for keys, tissues, ringing mobile phones and toy chickens.

That handbags can become dark, mysterious recesses beyond reasonable contemplation was borne out a few years ago when my wife found a full-sized hammer in hers. She had no idea how it got there, and so directed her questions to the defendant, ie me. After some nervous minutes, I remembered I had put it there three weeks earlier before a joint trip to a hardware store, to remind me to buy a second hammer. And after three more nervous weeks, I manfully confessed this to my wife. Still, if you can't notice a hammer in your handbag it's time to clean out your handbag, I always say.

Any other handbag hammer horror stories or such like out there? Who's ever reached into their bag and felt something they didn't expect, like a cherished family pet, or a squishy banana or nappy? Tell your tales below. As always, the best story could well win a prize!
Posted by Trevor Marshallsea at 6:32 AM