CHINGLISH OF THE MONTH!

Here's what was spotted on a fancy black sports car. Of course there's no finer way of highlighting the fact you own a prestige car than by plastering it with words ... 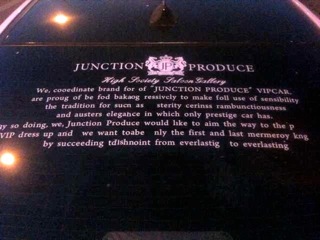 A lot of words.

To save your eyes, it says:

"We, cooedinate brand for of "JUNCTION PRODUCE" VIPCAR,
are proug of be fod bakaog ressively to make foll use of sensibility
the tradition for sucn as sterity cerinss rambunctiousness
and austers elegance in which only prestige car has.
By so doing, we, Junction Produce would like to aim the way to the p
VIP dress up and we want toabe nly the first and last mermeroy kng
by succeeding tdishnoint from everlastig to everlasting"

Just what they're trying to say about this vehicle is anyone's guess. But anyone who wants their car to combine tradition, dress-ups and rambunctiousness is OK in our book. We wish them well.

(NOTE: This was sent in by much-appreciated pic contributor Sandy Go. Thanks Sandy. Which reminds me, I once had occasion to look at the good lady's facebook page in order to retrieve another photo, whereupon I discovered that previously, Sandy Go lived in San Diego. Surely this is the finest coincidence of names since Queen Victoria visited Victoria, or that trip to central Asia that time by my mate Dave Turkmenistan. In any case it is my fervent hope that Sandy's middle name starts with an A.)

And by the look of this vehicle ... 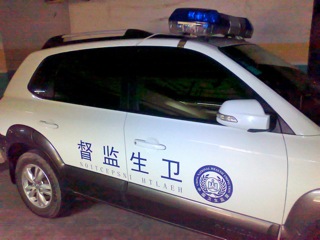 ... you've got to take the occupants seriously. 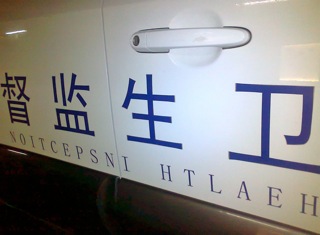 No, go on. Take them seriously.

MOST OUTRAGEOUS eBAY SALE OF THE MONTH

Here's what was on offer on Taobao, China's version of eBay this week. 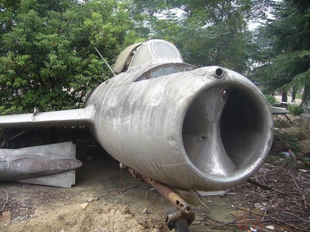 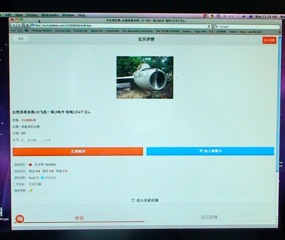 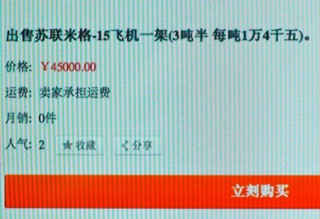 We thought these things were only sold on the Black Market, on Black Street, in the Black District. But we were wrong. The vendor, from the eastern city of Wuxi, didn't happen to mention whether he'd shot down the MiG-15 himself, had it given to him, or bought it on eBayski. In any case, don't ask questions: It's a steal and a fighter-jet renovator's dream!*

(* Delivery could be tricky.)

And the winner of the "Most rules for riding an escalator" award ... China!

Surely it's just an escalator.

But wait - there's more. At another mall, there was a more modern version of the same thing. 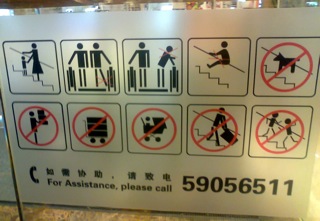 And if you're still unsure about taking that first step, simply call this number!

But be careful you're using a cellphone when you're allowed to ... 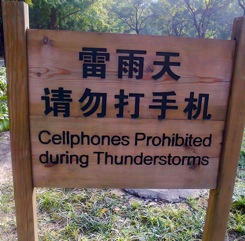 At this time of year, Beijing's not a bad place to be. There's usually some wind to blow the smog away, and city's trees are a festival of colour. 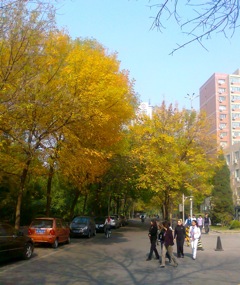 But it's getting a little chilly to do this ... 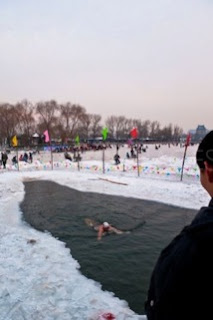 For me, the boys of summer get the vote for bravery. 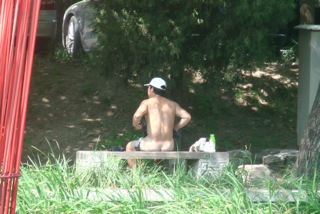 * That's all for this week readers. And, might I say, it's been torturous. Operating on the internet in China lately has been an experience that makes you want to learn how to tie a noose. My sources tell me it's because the five-yearly Communist Party Congress is coming up. Prior to such things, the government's internet filter - not to want to get too technical about it - goes berserk. If you, like me, are a Beijing resident driven crazy by slow internet speeds, I'm told the only thing to do is grin and bear it until the Congress is over. It starts on November 8 and lasts for about a week (they don't like to announce an end date. They'll finish when they finish.)

I'll (hopefully) bring you more on Monday, with that same piece I promised you but didn't deliver last week: Our first Royal Round-up featuring one remarkable, little-known Chinese invention!

Posted by Trevor Marshallsea at 1:16 AM