Getting fed up with China's capital? Tired of its smog? Its traffic? Its ever-increasing expense? Or perhaps its lack of things to do?

Is the culture getting you down? The language, maybe?

And is another bitter winter starting to feel like a set of icy fingers wrapping round your throat, slowly squeezing the life out of you, while that overly ornate clock your landlady bought ticks away the minutes of your existence?

Then the Tiger Father has the answer for you!

Or, if you can't, then go to the Water Cube! It's a great day out, even in winter. 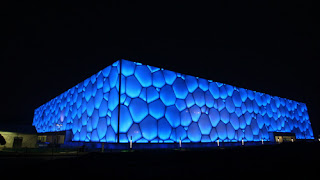 And, on the inside, this? 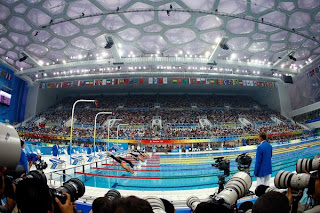 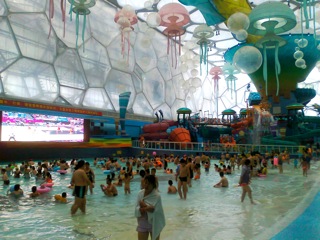 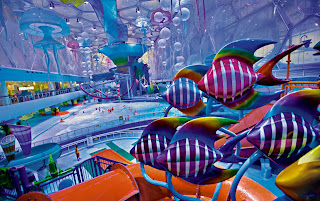 Yes, whereas once there was Michael Phelps, finely-tuned athletes and fierce competition, now there are giant plastic jellyfish!

That might sound silly, but the Water Cube is actually making a pretty good fist of defying the history of post-Olympic white elephants everywhere, having been turned into a water park. It's fun, especially for kids. It's relatively cheap, at 200 RMB for adults and 160 RMB for children.

Oh, but I forgot to mention, it does get a tad crowded sometimes. 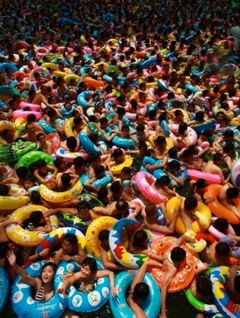 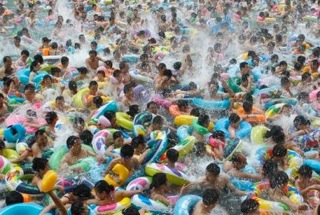 No, only joking. That water park is in Chongqing. Looks nice though.

There won't be crowds like that in Beijing. Especially in winter, although the water is nicely heated.

1. Two swimmers in each lane.
2. Or maybe three. Points awarded for not just finishing, but ensuring others don't.
3. Bring waterslides into it, maybe at the start like in Wipe Out.
4. Some giant plastic jellyfish wouldn't hurt either.

There is also food on offer, and places to sit for anyone not wanting to go on the slides. And if, as my mum used to say, parenting is all about finding ways to exhaust your kids before bedtime, the Water Cube certainly does the trick.

I should say, though, that the Olympic pool is still there, elsewhere in the large bubble building. So if you want to see the hallowed water where Phelps won his record eight gold medals, you can.

Elsewhere by the Phelps Historic Site we found a series of statues. I couldn't read the labels, so I assume it was yet another tribute, depicting the great man in a series of poses.


Posted by Trevor Marshallsea at 5:30 PM