ALL I NEED IS THE AIR THAT I BREATHE

The Tiger Family has returned to old Beijing, rustic beauty that it is, to begin another year. Returning is always a time for reflection, and here’s what I’ve reflected today.

Living here has its pluses:

3. Home delivered pretty much everything.

4. Because of a large population who all want work, you get to have a housemaid, for relatively little money, who’ll do everything from darn your socks to teach your children Mandarin.

5. Because of the curvature of the earth, the English football comes on after the kids go to bed and the dads have gone to the pub.

With all that, you’d wonder why some people – like diplomats and journalists – still get to call Beijing a “hardship posting”, meaning they receive a little allowance to compensate.

After the weekend we’ve just had, you come to understand why.

For instance, here are some of us enjoying our Christmas holidays in Canada ... 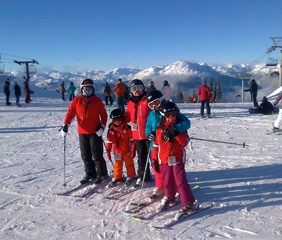 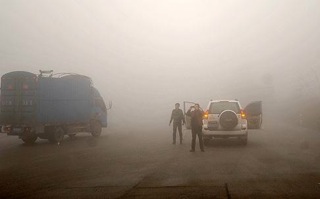 No, that was a joke. That's not Beijing. It's Guilin, in southern China.

What we really came back to was this ... 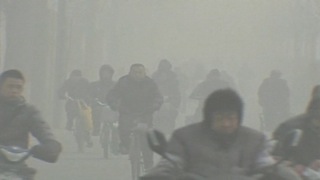 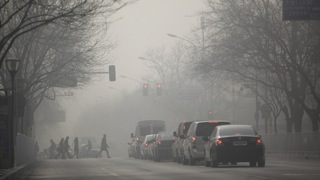 Here's a photo from 2008 of a busy intersection along Beijing's main street. It was taken before the Olympics and used by a news organisation to illustrate how the city might face a pollution nightmare for its big event. 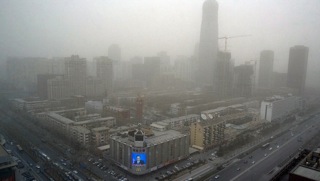 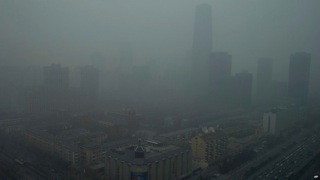 Alas we Beijingers battled with a pollution catastrophe on Saturday.

At the United States embassy there's an air quality testing device, the results of which are posted on the internet. Advice on how to interpret the numbers says that anything between 200-300 is "Very unhealthy: People with heart or lung disease, older adults, and children should avoid all physical activity outdoors. Everyone else should avoid prolonged or heavy exertion)."

That's the highest band on the advice list. As I type this on Monday afternoon, the index is showing 395.

On Saturday it reached 755.

It's tempting to say it felt like Armageddon, but I dare say if I ever actually do get to see it (How about them Mayans, eh?) it won't look this bad.

Saturday was one of those Beijing days when you can taste the air (for the uninitiated, it tastes like metal. Rusty, dirty old metal). Every so often a combination of factors combines to cause bad pollution days. Beijing sits on a plain ringed by mountains to its north, west and south. When there's no wind, and a low pressure system overhead, and the factories to the north-west are burning coal and Beijing's roads are as clogged as usual, the smog can get heavy.

But never like this. In 2010 a US embassy staffer got into trouble for posting a cheeky pollution rating on Twitter of "Crazy Bad". On that day, it was only just above 500.

The 755 was the highest reading recorded by the embassy since it installed it's machine in 2008. In the subsequent years, the index caused some chaffing in China-US relations. Chinese authorities said it was "insulting" for the city's smoggy shortcomings to be harped upon so by a foreign embassy. Local authorities have since loosened up a little, posting their own air quality numbers.

Ha! No it wasn't. It was put together by a friend in 2008. Again, as bad as it looks on the left, it was much worse on Saturday.


Mind you, have you seen what they're wearing in Europe nowadays?


Still, while China seems to be growing more aware of the seriousness of the problem - the pollution led many TV news bulletins on Saturday - I'm not sure how much comparing with the rest of the world is being done. That's if this conversation with our housemaid Mrs Wang on Saturday night is any guide. She's a 55-year-old Beijinger, fairly well read and well educated, but she still reads the Chinese state-controlled media like everyone else.

TIGER FATHER: It's horrible outside!
MRS WANG: Oh yeah. It's a bit hazy.
TF: It's not 'hazy'. It's smoggy. It's pollution. It's above 700!
MW: Well, yes, but noone knows what those numbers really mean.
TF: No, um, they do actually.
MW: Well OK, but - it happens. China's not the only place to have this. What about London?
TF: London?
MW: It's polluted, really smoggy. The River Thames is really polluted.
TF: That was a hundred years ago! Or the 1950s anyway.
MW: Well what about Sydney? What do you do there when you have days like this?

I had to try very hard to convince her that Sydney simply did not have days where you couldn't see past a few hundred metres, or anything remotely like it, and that whilst Beijing was showing 755, Sydney's rating rarely got worse than 50, or "good".

Which reminds me of a friend who checked her air quality app on her iPad here on Saturday. It showed a figure of 710, a rating of "GOOD", and a big smiley face! Clearly the thing had blown a gasket, since the numbers are only supposed to go up to 500.

Life here is certainly different to the west. There's the culture, for one thing. But most expats here aren't from countries where the pollution level is a daily topic of discussion. Here we also talk about which brand of face mask is safest. We regularly check our iPad pollution apps and our Twitter air quality feeds (provided you can get around Chinese internet controls). Children are kept indoors in schools on bad pollution days, and most of us invest in expensive - but quite necessary - air filters for the home.

At least China is showing a slightly greater sense that this is an important issue. Trouble is, knowledge of the long-term effects of hanging about in this sort of smog is still limited. Noone really knows what it's going to do to us. Let's hope it's not bad, eh?


Alas this is not the first time we've tried to peer through the smog. I've republished two earlier posts on the subject below.

Posted by Trevor Marshallsea at 12:34 AM