BEIJING ON PODIUM IN POLLUTION CONTEST

(SPECIAL NOTICE: Dear Readers, As a busy internet tsar, I’m often asked this question: What’s going on in China? Invariably, I answer with a very useful, succinct phrase from my home country, Australia which goes a little like this: “Buggered if I know”. I’ve got kids to harass and DVD boxed sets to watch for God’s sake. How should I know? Thankfully, there are some people who do. And, since it’s been brought to my attention that many of you don’t have the time to trawl the web for the hottest news of the week, I promise that when I can’t think of anything better to do, when I’m too lazy or bereft of original ideas on the occasional Thursday, I’ll do it for you. What a guy, huh? I know. Some of it will be funny. Some just weird and unusual. But one thing’s for sure, it will fulfil one of the oldest and most import requirements of quality journalism: It’ll fill a space!)

So, what’s the big news in China this week?

Of the 10 worst cities for air pollution in the world, yes, all but three sit right here in the Middle Kingdom.

And despite cleaning itself up for the 2008 Olympics, Beijing has got onto the podium by taking bronze, which coincidentally is the colour of the air here most days. This is according to the National Environmental Analysis released by the Asian Development Bank and Tsinghua University, which was reported on several news sites.

China boasts the worst city in the world - probably by any criteria - in Taiyuan, a coal-fancier's Shangri-la 400km south-west of Beijing. The report also said that of China's 500 cities, only five meet the air quality standard recommended by the World Health Organisation. Notwithstanding that '500' sounds suspiciously like a very round number for the amount of places classified as cities, 495 is a lot.

Number two on the list - though fashionistas might be knocked down with a feather boa - is Milan. Yes, Milan, Italy, home of style, veal and two big football teams with the same surname. It turns out cars are sometimes banned from the roads in the whole city for the odd day or two.

As reported on Monday, this is how most Beijingers protect themselves from the smog - with a face mask - 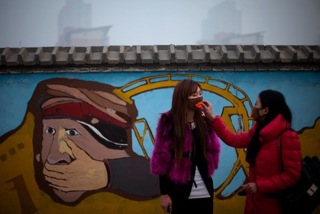 In style-conscious Milan, they do this ... 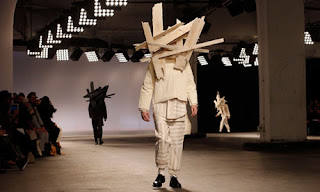 But for now, the smog's gone - blown on the wind like so much fine particulate matter ...

After Saturday’s record smog rating of 755 (remember, it’s classed as “dangerous” when it hits 250), we threw a party on Tuesday when it reached “unhealthy”.

When I took the following photo at lunchtime on Thursday it was merely 105 – which is listed as “unhealthy for sensitive types”. Pah, we all said. Is that all you’ve got? We can handle that with our face mask tied behind our back!


Yes, visitors to the Jilin Ice Festival have either been amused or not amused this week, depending on their view of the practice of hanging live roosters from an ice wall to be shot at by customers with bows and arrows.

The scenes were reminiscent of an old custom at the People’s Liberation Army rifle range in Beijing in the 1990s. Back then, patrons could take pot shots at live hens which, in a sort-of recreation of the Passion of the Christ told with chickens, were nailed to a fence. People could then shoot at them with military-grade weapons. From not very far away. Not quite anti-aircraft guns, but still it was messy.

Anyway, that was stamped out long ago. But similar things still go on in Jilin, north-east China, as these photos on Chinasmack.com show.

(WARNING: The above photos may disturb some readers. I probably should have said that the start, really. Mind you, there not as bad as some I saw, with arrows sticking out and stuff). 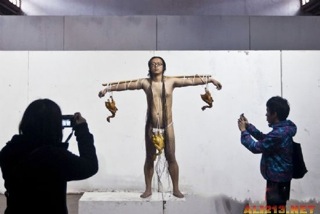 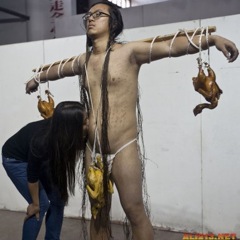 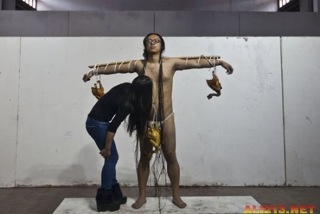 The performance climaxed when the muse, after planting a couple of hundred love bites on Mr Kang, threw three buckets of cold water over him.

Still, when it comes to Chinese performance artists, I'm not sure how whether Kang or anyone can match up to the acknowledged trail-blazer of them all (this jaunty fellow seen below). Here's how we reported on him previously.


So we can all relax. The future of art is in safe hands.

Posted by Trevor Marshallsea at 11:49 PM