FROM THE SMOG DESK

BEIJING, Jan 24, Huaxin News Agency - Beijing is to institute a new system of “naming” heavy smog days in order to make it easier to historically identify them, officials announced today.

With days of choking air pollution becoming more frequent, and with authorities having recently begun tracking developments long term, it has been agreed upon that a better means of identification is needed, similar to the naming of hurricanes and cyclones. These will be enacted for days when the pollution rating is a ‘hazardous’ 300 or higher.

“In order to chart the progress of harmful particulate matter in the air, it is necessary to have a clearer system to remember the worst days,” said Mr Hao Kongqi, spokesman for the People’s Municipal Consultative yet Autocratic Citizens’  Council for the Monitoring of Airborne Matter that Could Cause Cancer and God Knows What (PMCACCMAMCCCGKW).

As of February 1 heavy smog days will be given a male or female name in the same way intense wind events are given names, such as Hurricane Katrina and Cyclone Tracy.

“For example, a day like we had on January 12 where the pollution rating reached 755 might be called ‘Motherfucker Bob’,” Mr Hao said.

Mr Hao said the list of names was currently being drafted, with different categories used to reflect different levels of pollution. Real names might also be borrowed to reflect intensity. Days in the 400-500 band, for example, could be named after some only slightly nasty historical figures.

Mr Hao said an initial list of 1000 names would be drafted, “which should last us a couple of years at least.”

(Or outside of Canada, 'Out and About').

Seen on the same shopping strip ...

And just around the corner, it's the ... 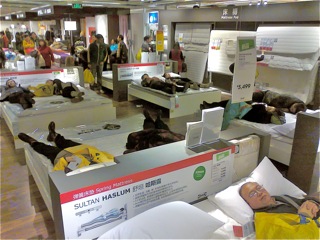 (Simply search for IKEA in the search window at right, or copy this link http://www.thetigerfather.com/2012/02/business-news-ikea-to-become-sleeping.html. If the hyperlink function on this blog platform ever starts working I'll let you know).

Well this week we can report that the bar has been well and truly raised, thanks to these magnificent Ikea pics sent in by frothing-at-the-mouth readers Brooke McConochy and Juliet London-Fog.

In this critic's eye, this is a great pic which, for its depth-of-field and feeling of sheer desperation, evokes memories of this all-time favourite from a McDonald's restaurant.

But the winner, for composition and sheer gall, has to be this Ikea fan:

Posted by Trevor Marshallsea at 12:11 AM