FUN IN THE SNOW AS WE RING IN THE NEW YEAR!

Of course, it's all very easy to poke fun at a place like Beijing.

In fact that's the main reason I do it.

But really - just start with the climate situation. In January we came through the worst month of pollution on record, or Airmageddon as it was dubbed. Some attempted to dub it Jairnuairy, but that was declared too clever by half and rejected by dubbing chiefs.

On Monday we had a large dumping of snow, called Snowmageddon. Snow is at least exciting here because whenever it falls it feels like the first time snow has fallen.

I mean that in a bad way. Airports close, the traffic is diabolical, everyone runs around screaming "What the hell?", the economy grinds to a halt, et cetera.

Furthermore, last Thursday it rained briefly, the temperature dropped, and Beijing was coated in a sheet of ice that was extremely slippery. This day appeared to avoid a serious dubbing, but shall henceforth be known as Icemageddon.

In any case we've been experiencing a climatalamity. And this morning, as the kids and I rode our bikes to school, it was -16 degrees Celsius, with a wind chill of -22 (or 3 and -7 to the old fashioned). The forecast for Sunday - Chinese New Year's Day, or the first day of Spring Festival - is for a high of -4 and a low of -12 (25 and 11 Fahrenheit). So "Happy Spring", or "I'd Hate to See Winter" everyone!

We are now in the last few days of the Year of the Dragon, who has worn the crown with distinction for the past 12 months. On Sunday, in a glittering ceremony in Beijing, she will hand over to another reptilian favourite as we welcome in the Year of the Snake.

My Chinese wife is keyed up to go watch a traditional lion dance on Sunday morning. Personally, I've seen them and they don't really do it for me. Real lions dancing - maybe. A bear riding a bike? I'm in. A parrot riding a miniature bike? I love those. Plus they're about as Chinese as lions anyway. But - two blokes in a lion suit, with all that noise? I think I'll mark the occasion instead by staying warm inside and paying homage to this:


Still, you don't live in China for 2,463 days, as I have, if you don't find parts of it at least in some ways attractive or vaguely tolerable. For instance, on Snowmageddon, I went out riding to see what Beijingers get up to in the cold, and I found ... 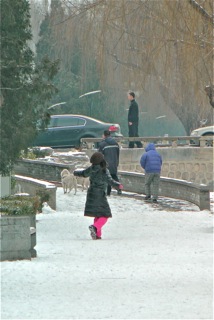 And just across the road...

It's Chinese New Year's day on Sunday, and that can mean only one thing ...

That's all for this week. China will now close down for it's big New Year holiday. And as I always say, when China closes down, so do I. But only for a week. Back on February 18.

In the meantime, below is what we artists get away with calling a reprise, or a regurgitation, of what I did last year to explain what Chinese New Year is really all about. Enjoy. (And don't forget, if you're bored next week you call find all sorts of old posts in the Popular Posts and Archive sections to the right).

Posted by Trevor Marshallsea at 9:36 PM