SOMETIMES I SWEAR I'M LOSING IT

HAPPY NEW YEAR! I hope the snake brought you all lots of presents. Today I bring you my column which ran this month in That's Beijing, That's Shanghai and That's PRD (Guangzhou) magazines (with extra bits added in for a guaranteed 15% more laughs). Yours sincerely, Tiger Father.

SHOOT. Sugar. Fudge. Far out. Jeez. Jolly. Blooming, blasted and blessed.
Innocent, aren’t they? Harmless little words fit for any situation.
But look a little more closely and you’ll see they’re actually potent, charged little things, spat out of the mouths of people who want to say something else but can’t. They’re words that bounce around the airwaves wearing little black cloaks and hoods. Underneath you’ll find the hearts and souls of vile little swearwords.
Like Elvish and Klingon, there’s a language which is spoken by millions but has no official recognition at the United Nations. It’s the language of parents.
When you have kids there’ll be times when you’ll want to scream and possibly swear. Many, many of them. Often in the space of 10 minutes. Of course you can’t. Or you shouldn’t. Some do. In fact you can see these folks every day, on Jerry Springer.
But most of us catch our words before they fall off our tongues. Thus the sh--  word for poop becomes shoot or sugar. Fudge or far out come to the rescue sometimes too.
It seems universal. Under pressure, my French friend’s mother would start to say merde – the French word for, err, ‘sugar’ – but would sub in Mercredi. Thus a woman running round screaming ‘WEDNESDAY’ was a sign of trouble.
In Mandarin, tones only get me into trouble. For angry Chinese on the cusp of a cuss, they could be a saviour. "No no honey - you thought you heard third tone on that sha. It was second tone. Completely different."
The Chinese will say “His mother’s” (ta ma-de) and everyone knows it’s short for a part of said mother’s anatomy. With little ears present, a broiling dad can maybe not shorten but extend: His mother’s … name is what?


OK, that was in a bar. But this was in a children's playground ... 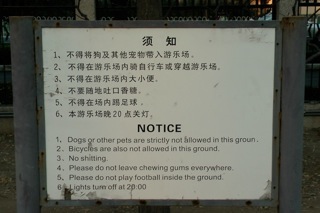 I know parents who swear around their kids. In effect, they’re saying “I’m going to use these words around you, and I’ll trust you to know you can’t say them.” It’s an interesting experiment in giving children responsibility. And perhaps greater usage disarms the word, so kids won’t see a thrill in saying it.
But fudge that sugar. My heritage confounds such enlightened thinking. My mother had two formidable forces running through her:
She was a devout Catholic. Hence, growing up, we couldn’t use words like ‘bloody’ (it represented Jesus’ blood on the cross), or ‘damn’ (damnation = hell). Nor could we use the adjectival and particularly Australian ‘flaming’, as in “Put the flamin’ thing over there”, for this was connected to the fires of hell. And ‘jeez’ was obviously out, for it was clearly what Jesus was called for short by his mates.
Mum was also a schoolteacher. So not only did she think cussing would propel us to hell, we’d be exposed for our base way of expressing ourselves on the way. So stridently did she believe this, I can still taste the soap from a mouth-washing she gave my sister and I when it was once found that our mouths were filthy.
Still, even this saintly woman was prone to surrogate swearing. As little Catholics, we’d go to the priest and get our rosary beads blessed. That was pronounced blesst. When something was trouble, it was bless-sed. Mum might snap: “Pick up your bless-sed schoolbag!” This was just bloody becoming blessed mid-mouth. Bloomin’, blasted and blimey also worked.
Jolly became a surrogate expletive. “PUT. THE. JOLLY. THING. DOWN!” Mum would enunciate. Just as I’d never thought of my schoolbag as sacred, I’d never thought chocolates or biscuits were particularly jovial before. Or dead rats.


When kids are babies you don’t have to worry. But they can learn language with alarming speed. I managed to keep my bluest words in their holster, but when our 18-month-old Lani began roaming the house taking the Lord’s name in vain, it didn’t sound great. I was impressed she used it in the right context and with the right accents, just like her dad. But with my mum a regular visitor, I had to jump on that Wednesday right away.
Nowadays I find it funny, like watching a train crash might be funny, to see childless friends talk around my kids, particularly male journalists. The working language of journalism is swearing. (It’s because we’re wordsmiths with such vast vocabularies). Friends would still speak fluent Expletivese, seemingly blind to the little ears a foot below their mouths. In terms of minding Ps and Qs, these were like horror scenes, perhaps from the great director Alfred Hitchthing.
Sometimes these words slip out of our children. Or they fly out boldly. In our car last week, seven-year-old Lani got tangled in her words, swapping over a first letter when talking about the punishment for illegal parking. Instead of a “parking fine”, this became a “farking fine”. Lani and sister Evie thought this so funny they repeated their new word all the way home. “I’m farking here!” or “I'm farking good.” It was all innocent. I hope.
A friend’s five-year-old boy wasn’t so accidental, announcing one night at the dinner table: “F*#K!”
“I beg your pardon!” his mother said. He obliged.
“F*#K F*#K F*#K F*#K F*#K F*#K!”
His parents sat there horrified, before the boy added in some troubled bewilderment: “What’s it mean?!?!”
I choose not to use, nor try to disarm. If a cussword does slip out, I’ll quote the great Ari Gold from Entourage: “Only Daddy gets to use that word!”
Or I imitate my mother.
“EAT YOUR JOLLY DINNER,” I cooed to our five-year-old last week.
“Daddy! You can’t say ‘jolly’,” Evie replied.
I froze in panic. For a second. “Yes I can,” I said. “It’s one of the words I can use instead of a bad word! Don’t scare me like that.”
It’s just a $&*@ing minefield, this parenting.

Posted by Trevor Marshallsea at 9:38 PM