Welcome back! To me! Back from holidays and partially refreshed, I hereby present to you my potentially award-winning 'Director's Cut' column from That's Beijing/Shanghai/Guangzhou magazines this month. Now back in harness, I'll be updating this site each Monday and Thursday as usual. Enjoy! Trev the Father. 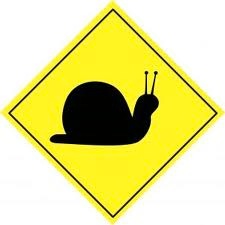 It’s the slowness that kills you.

They used to say speed kills. Don’t believe them. When you’re a parent of small children, the worst thing that hangs over you, like a smog cloud that won’t lift, is that everything … takes … so … mind-numbingly … lo-o-o-ng.

They don’t warn about this in pre-natal class. They tell you the birth could be slow. But who cares about that, right? You’ve got a week off work. All you and your wife have to do is wait for a baby.

What they should tell you is parenthood is slow. Being in charge of people who take a head-bursting eternity to get dressed, eat food or make a birthday card. Or those who don’t give a damn if their schoolbus leaves in 10 minutes, or have no concept of what 10 minutes is anyway. Or who sometimes, en route to brush their teeth, will think now's a great time to read a book.

It’s bad enough with two. I don’t know how those Mormon women do it with a dozen or so. And don’t get me started on fish.

The pre-natal teacher woman should have warned us that if we live in a cold climate, leaving the house will take, on average, between half an hour and three days.

Having often suited two of them up for outings in the snow – including skiing holidays – I’d gladly take on any Shaolin monk at whatever form of hardship test he can concoct.

The preparation for a simple bike ride sounds something like this:

After crunching two bikes into the elevator we’re close to outside. The kids are poised, I open the narrow building door and – nomatter how many times we do this – as if in a really bad comedy skit, they go at the same time, and wedge each other, hopelessly, in the doorway. Like crabs in a net, kids instinctively know they must then push harder, tangling the bikes even more hopelessly. I sometimes watch in despair. Mostly, though, I have to avert my eyes.


By far the worst slow thing is eating. Well, in half our cases. Our youngest, Evie, eats like a leaf mulcher. She takes after her mother. I mean that as praise. My wife Stef is Australian now, but I’m reminded she’s ethnically Chinese by the way she eats every meal like she’s got something to do afterwards, like defuse a ticking bomb.

Anyone who’s been to the races in China – by that I mean any given night at a local restaurant - will know what I mean. It looks like everyone’s in an eating contest, keen to get the whole ordeal over with between 6.00pm and, say, 6.10, and get home to bed. The Guinness Book of records lists ‘mosquito wings’ as the fastest moving thing in the natural world. Second is the hand of an average Chinese bloke with a bowl of rice at his chin.

I enjoy my food slowly. I think it’s linked to my mother. Perhaps she was extremely cautious and told us to chew every mouthful 240 times. Or perhaps, to be kind, it was because she was an awful cook. There was never much incentive to eat fast.

How I regret my slowness now. PARENTS: If you have a slow eater, get on that problem right away. A baby should have roughly 20 minutes on each breast, tops. After that, the breasts shall be returned to their rightful owner.

I used to feed baby Lani like I’d feed myself. Stef would caution 30 minutes for half an avocado was too long. I’d call it gluttony. Stef warned it would bite me back, and as much as it pains me to say it, my wife was right.

Too much detail might sound mean. I won’t mention “The 14-minute Slice of Apple Incident” (though I used to not be the type of person who’d time someone eating a slice of apple). But Lani seems now to be the only seven-year-old who’s into molecular gastronomy. She holds food in her mouth until it basically erodes, molecule by molecule. We’re caught in a bind between her needing her daily intake of nutrients, and having to start university.

There’s an exquisite pain in it for the spectator. I’ll watch, encourage and make suggestions. Or I’ll scream as I imagine people in solitary confinement in straight jackets scream. Sometimes the last piece of fruit goes onto her spoon. Relieved, I’ll watch it wobble toward her mouth before finally – plonk – it falls off onto the floor. If it’s roundish, it never stays right there, of course, but rolls away under something. I feel around for it. I also feel the will to live seeping out of me.

Most kids list their favourite animals as the kitten, the puppy and the unicorn, (though those have now been hunted to extinction in Asia for the aphrodisiac powers of their horn).  Lani must be the only seven-year-old to list her favourites as the sloth and the oyster. I’m waiting for the day she asks if she can have her own pet barnacle.

But I don’t want to say she’s slow all the time. As every parent knows, it’s only at the worst times.

Kids are fun. They’re also really slow. Nothing’s all good or all bad. I can console myself with the thought that Lani might just be a genius, for I’ve heard you can’t rush that.

Posted by Trevor Marshallsea at 12:15 AM