CUNNING WAYS TO FOOL THE COPS

WE all know the feeling: You've got your new Ferrari, now how we will stop the police getting up in our business if we fancy travelling 200 kmph over the speed limit around Beijing one night?

Nowadays, pesky traffic cameras are everywhere, taking photos of our licence plates which could be used against us. It seems we can't do a damn thing without someone prying into our business. How China has changed!

Thankfully, modern Middle Kingdomia is not only in the information age, but the innovation age as well. There are plenty of people to come up with ways to stop running afoul of the law when you're merely minding your own business whilst getting about at Formula 1 speeds.

Today the Tiger Father brings you your go-to guide to "working the China system", or "breaking the law", in relation to your licence plates.

1. Just take the bloody things off. 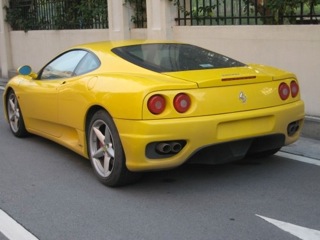 Beijing is full of sights like these. Newly-filthy-rich people, particularly the offspring of important Communist Party cadres, like spending their money on fast cars. They then like to neglect to get them registered. Obviously, if there are no plates on the cars, photos taken by traffic cameras aren't much good.

The idea was once explained to me by a local, who I assume was used to taking on trust everything he read in the Chinese media, or was either born without the cynicism gene, or much of a brain.  He said it costs a lot of money to register a fancy sports car like the one above, so instead of registering them, owners chose not to register them.

It's so simple! Particularly if you ignore that part of the law which states something like "cars must be registered".

Perhaps the owners, who've just paid half a million dollars for the car, truly don't have anything left over for the registration. Perhaps also, if we're dealing in wild guesses, they've bought the Ferrari so they can drive really really fast?

To outsiders, driving around in a car without plates looks like an invitation to be pulled over by the fuzz. Particularly in Communist, rules-mad China, no? By contrast, everyone in China knows it would be a foolish policeman indeed who would dare pull over a car driven by someone so cocky as to not bother with plates. They clearly have money and connections. If you, Mister Policeman, fancy pushing a pen in an office in the middle of the Gobi Desert for the next 40 years, go ahead and make the little twerp's day.

2. Just put on some fake plates, the more imposing, the better.

Recently, China announce a crackdown on the abuse of military licence plates. If you have them, you can basically do what you want on the roads here.

I know what you're thinking: So does everybody. But military plates give extra insurance against getting pulled over if you really stand out from the crowd. You can drive on the shoulders of freeways to skirt traffic jams, run red lights, et cetera, knowing that you have plates that show you're in the most important service in the country, and should be honoured, respected and afforded many rights and privileges.

That's why army types were abusing the system hand-over-fist. Abuses including military officials grabbing a handful of plates to share out amongst family and friends, or for sale.

Army plates became so popular, a big business sprung up in counterfeiting them.


3. OK, I'll have the licence plate if you really insist. But I choose to cover it up.

People really drive around here with their licence plates covered up. Here's a photo I found on the internet at Chinatoday.com.


4. If I don't have any sanitary napkins, what could I use to cover my plates?

Well, you could use two blokes. 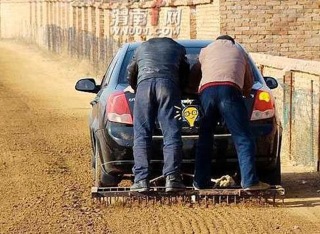 Or you could do it like this car I spotted in Beijing today.

Thankfully my fears were put at rest.


In the same Taobao category, which, with my loose grasp of Chinese, I think was called "Really Dodgy/Illegal Car Products", I also found these:

If, like me, you won't, or can't, stump up the twenty cents for a dust cover, here's a range of budget-friendly, innovative things you can do to turn your old junk into fine fine-savers. 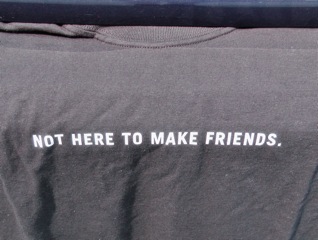 This has been floating around, so you may have seen it. Then again, a lot of readers tell me I'm their main source for news about China (and it's neighbours sometimes). In which case we're all in trouble, but anyway ...

The Miss Korea pageant is in full swing. I don't think I need to say "Miss South Korea" here, because, not putting too fine a point on it, a national beauty contest is not the type of thing the North Koreans would or should be into.

The Miss Korea battle has drawn worldwide attention. There are 20 contestants, and experts have declared it will be very difficult to pick a winner.

That's because they all look exactly the same. That's not a PC thing to say about north Asian people, we know (even if many Chinese say it about westerners. Yes they do.) But the thing is, South Korea is the regional home of plastic surgery - a topic I've touched on before. Eye-westernising, cheekbone angle-grinding, jaw re-shaping, et cetera. You need it? You go to South Korea and get it.

The trouble is, from the look of it, all 20 contestants were treated by the same carpenter. Here's just five of them.


I could show you the other 15 but there's little point. Maybe they're related. The world's first scorelets?

It just goes to prove the old saying: You can always tell a Miss Korea entrant. But you can't always tell them apart.

For a fun look at a fast montage of them one-by-one, go to:

(I'd love to have the technology to just link you to that, but until China and google kiss and make up, you'll have to copy and paste, sorry.)

Thanks for reading. More nonsense on Thursday!
Posted by Trevor Marshallsea at 1:57 AM